The National Association of Nigerian Students (NANS) has criticised the federal government for the ongoing seven-month-long strike embarked on by the Academic Staff Union of Universities (ASUU).

NANS said the strike has jeopardised and bastardised the fundamental human right of the Nigerian students which is access to education.

Negative effects of the strike on students

The national student body leader said the strike has affected the future of their members adding that some male students have become mechanics, some are learning printing works while some female students are pregnant.

“The federal government has jeopardised and bastardised the fundamental human right of the Nigerian students. There are some who came to the protest yesterday with their ID cards, learning mechanics now. Some are learning printing works, while some female students are pregnant,” Samson said.

Reason for the protest

NANS also said the essence of the protest that was staged at the airport is to alert the international community that something is going on in Nigeria about education.

The student body leader said their demand is for the universities to be reopened, adding that the students are keeping their fingers crossed on what will be the outcome of a proposed meeting of the Speaker of the House of Representatives, Femi Gbajabiamila with the leadership of ASUU.

Samson said if the meeting does not bring solutions, the students will go ahead with the next phase of protest at Apapa port, Lagos. 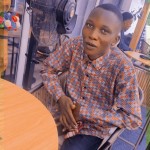